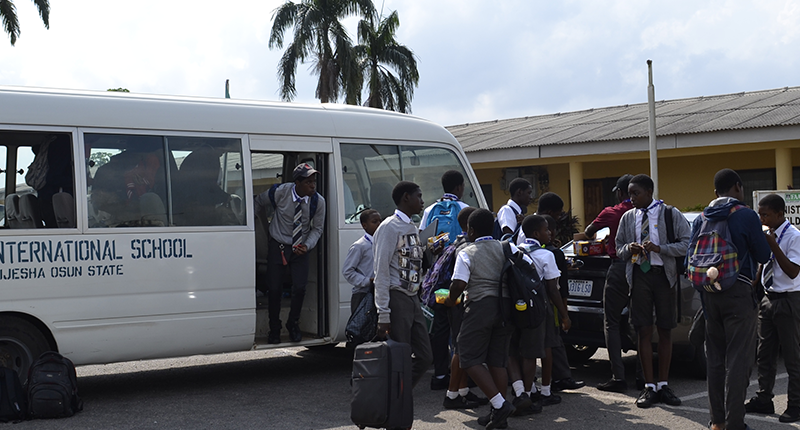 Academically, students within the school achieved the best results in the history of the school with five students surpassing the previous top mark in JAMB-UTME. This shows that students across the school are benefiting from an outstanding academic programme and I congratulate all the teachers for the work they have done. This work is also reflected in the international arena. Once again this year, the school received an Outstanding Learner Award from the British Council/Cambridge International Examinations for the performance of students in the IGCSE examinations. Alongside this recognition of academic success, during the last session, two students were recognised by COBIS, the premier international schools association, for their outstanding achievements within the school community and nationally.

Our commitment is not only to develop students who achieve success within the school but young men and women who continue that success when they graduate. During the 2017/18 academic session it was gratifying to hear from students who have progressed to universities in Nigeria and abroad and continued their success. As a school, our expectation of Olashore graduates is not just academic success but all-round exceptional performance. We had students graduating with first class degrees from universities as diverse as University of Louisiana, USA, University of Birmingham in U.K., and Redeemers University in Nigeria. For this consistent top-level performance by Olashore graduates, I was pleased to receive the award for 2018 Africa Outstanding School CEO Award.

At Olashore, we believe that the strong foundation built during six years at the school and developed at university provides the platform for our graduates to carve successful careers in the 21st century. Our Guest Speakers at both Speech and Prize Giving Day and Valedictory Service were members of the pioneer set of Olashore International School who have gone on to great success here in Nigeria. In addition, two of our alumni were recognised by Forbes in their 30-under-30 list of young men and women who will have a significant impact on the continent. I believe we are the only school on the continent who can claim two graduates on that honour roll. To cap the year, in July, Mr. Bode Olanipekun, who graduated from Olashore in 1999 became the youngest SAN in the history of Nigeria.

As we reflect on a very successful 2017/8, we also look forward. This academic session, the school will celebrate its 25th anniversary. I often speak to those who were here in the very early days, staff, students who are now alumni and of course the Chairman of the Board of Governors. They all comment on how impressed they are that the school, which set such a high standard in those early days, has maintained that standard over twenty-five years. The facilities have been maintained, improved and expanded. All staff remain committed to excellence and the students continue to exhibit those values, honesty, service and honour, espoused by the Founder, Oba Oladele Olashore, at the opening of the school.

I look forward to an exciting year, full of events to celebrate the twenty fifth anniversary. I look forward to building on the success of those twenty-five years as your children develop the skills and competencies to be global leaders in the 21st century.

I wish you all a safe trip to and from school and look forward to seeing you during resumption.