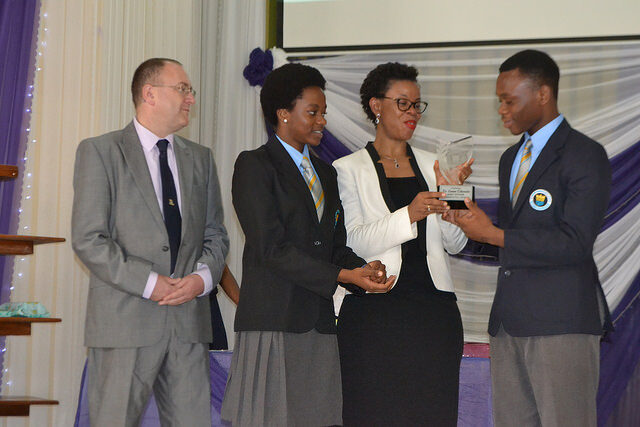 Welcome to the Speech and Prize Giving Visiting Weekend. This weekend is one of the highlights of the year as we take the opportunity to celebrate outstanding performance across the school. During the ceremony on Saturday we will recognise students who excelled in academics, sport, performing arts and the development of 21st century skills during the 2017/18 academic session.

The 2017/18 session was a very successful year for the school both internally and externally in many ways. From an academic point of view, the first term saw the Year 12 students sit their IGCSE examinations where they achieved the best results in the history of the school. They followed this up in term 2 by achieving exceptional JAMB-UTME results with five students scoring higher than the previous highest in the school. Term 3 saw exceptional WAEC results. The term ended with the school again receiving the Top School in Nigeria award from Cambridge International Examinations as Halima Salaudeen was recognised as the best student in economics in Nigeria.

Beyond academics, students in the school achieved great success. The female football team went on an exceptional unbeaten run at the start of the year that led to them being crowned AISEN national champions. The school choir and orchestra, in addition to performing at school events also took part in national competitions with Jewel Agbara winning the best instrumentalist prize on violin. The school debate teams performed in various states across Nigeria and in March were crowned the Akintola Williams Debate national champions at the final in Lagos.

Internationally students were also recognised as Head Boy, Taslim Salaudeen, and Chidera Olalere were recognised with awards by the Council of British International Schools (COBIS) at their conference in London. National and international recognition also came to a number of OIS alumni. Obinna Okwodu and Folarin Falana (Falz) were recognised by Forbes magazine in their 30 under 30 list, identifying outstanding potential across the continent. In addition, our guest speaker, Bode Olanipekun, who graduated from Olashore in 1999, became the youngest Senior Advocate of Nigeria (SAN)

As we celebrate last year’s success, we continue to build on it. The Year 12 students are currently sitting their IGCSE examinations and have shown great commitment and the school debate team have been invited to take part in the COBIS Student World Debate in Bucharest. These exciting ongoing developments provide an excellent backdrop as the school celebrates its 25th anniversary.

To celebrate 25 years since Olashore International School first opened its gates there will be a wide range of events across the country. This month the school drama troupe will perform in Lagos, Ibadan and finally Abuja. We look forward to seeing many parents and friends at the event. Then in February the Founder’s Day weekend will be a major celebration and we look forward to welcoming back the founding Principal, Dr. D. F. Burgess along with many special guests. February will also see the OIS 25th Anniversary Lecture take place in Lagos and we have some outstanding speakers lined up. Finally, in June, the Friends of Olashore will host a major celebration for alumni and families who have been part of the school community throughout its twenty five years.

I hope you enjoy the various activities taking place this weekend. Wishing you a safe journey to and from school.